“There could be no finer or appropriate context for one of his exhibitions than the Lake District, the spiritual home of English Romanticism, which also has connections to one of the defining moments of human history, the Holocaust.”
Sir Nicholas Serota, Chairman of Arts Council England and former head of Tate Modern, 2017. 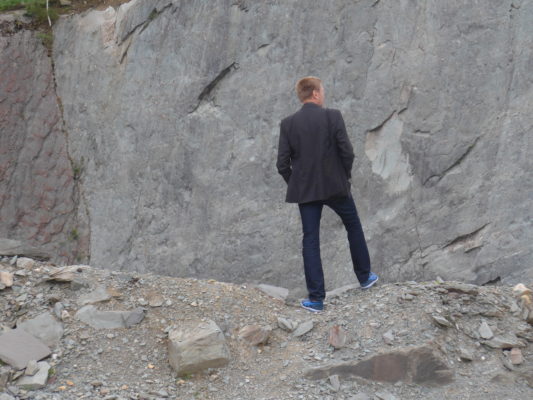 Miroslaw visiting a quarry in the Lake District.

Miroslaw Balka has exhibited in leading galleries throughout the world, including the Turbine Hall in Tate Modern, London, The Venice Biennale and most recently in Tokyo and Berlin.

We first met Miroslaw in 2015 when he came on a site visit to Windermere and the Lake District in preparation for a small installation in our main gallery.  Since then, we have had the pleasure of visiting Miroslaw’s studios in Warsaw and in his home town of Otwock, Poland.  With him we visited Treblinka, where many of the families of the Jewish children who stayed in the Lake District in 1945, perished. This was an incredible journey to make with him.

We were delighted when Miroslaw, one of the World’s leading contemporary artists, revisited us in 2017 and agreed to exhibit once more.  His powerful installation, entitled  “yromem” concluded a remarkable two year arts programme “Holocaust & Memory Reframed”.

Miroslaw lives and works in Otwock, Poland, a town that, before World War 2, had a very large Jewish population and his work remains rooted in the place of his birth.  He deals with both personal and collective memories, especially in relation to his Catholic upbringing and the collective experience of Poland’s fractured history.

‘mapL’ projects a video recording of “looking through a camera at a schematic map of Lublin at the museum in Majdanek with, marked on it, places of executions and places of segregation and internment marked in red and black”.  Marek Gozdziewski, from Fragment catalogue, Centre for Contemporary Art, Warsaw 2011. 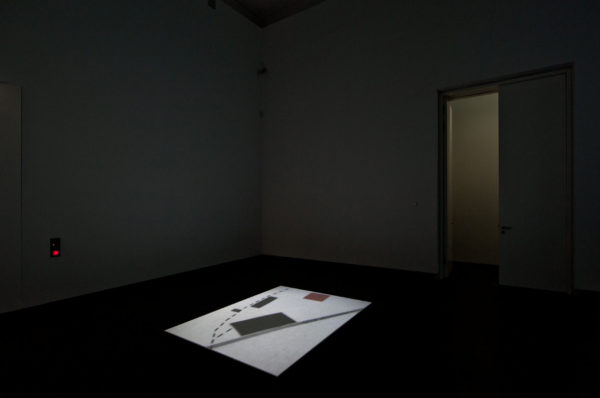 The map was projected onto salt contained within a steel frame.  For Miroslaw, salt is a very important material, its use reflecting “more globally for European Culture to the area around the Dead Sea in Israel” and by referencing it to “dry tears”. 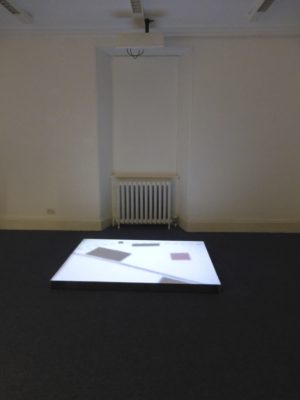 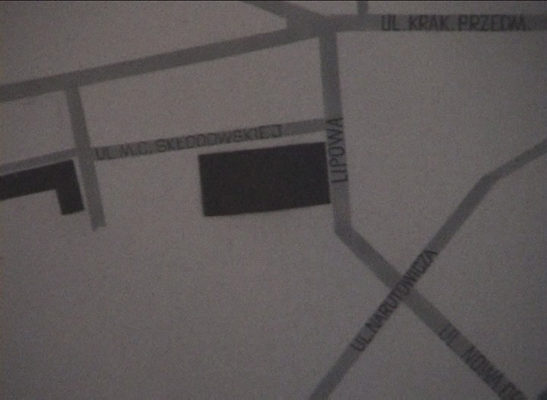 A second drawing ‘Concentration Camp’ was made using charcoal in the second half of the 1970s. 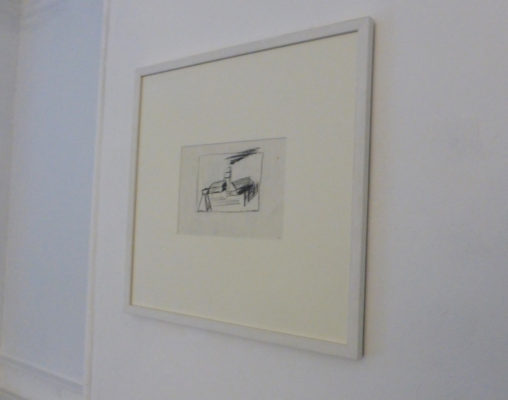 ‘Concentration Camp’  was produced after Miroslaw’s first visit to the remains of the concentration camp, Majdanek near Lublin whilst he was at primary school. It contains the iconic images that are related to the Holocaust – the barack, the watchtower and the chimney.  These “terrified” Miroslaw but became “elements of a very important vocabulary” for him.

A private view of the installation took place in the evening of the 8 September.  We were delighted to welcome our guest speaker Kasia Redzisz, who is the Senior Curator at the Tate Liverpool and Sarah Berjerano, Miroslaw’s agent from the White Cube Gallery in London. 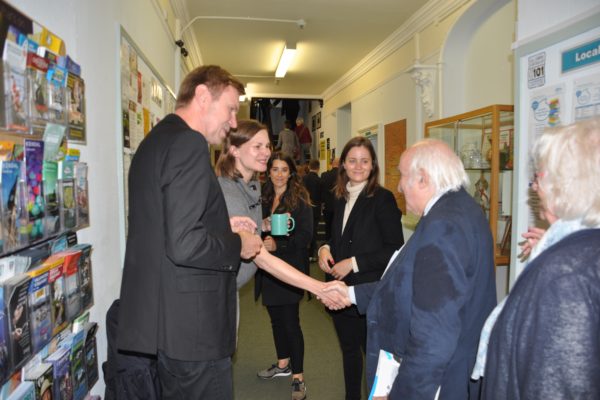 Alongside Miroslaw and his assistant Magda were many other special guests including dignitaries and officers from Windermere Town Council, South Lakes District Council and Cumbria County Council.  We were thrilled that three of the Holocaust Survivors, Joanna Millan, Ike Alterman and Sam Gontarz also came together with friends and family, some of whom had travelled long distances to meet with Miroslaw and to see his work. 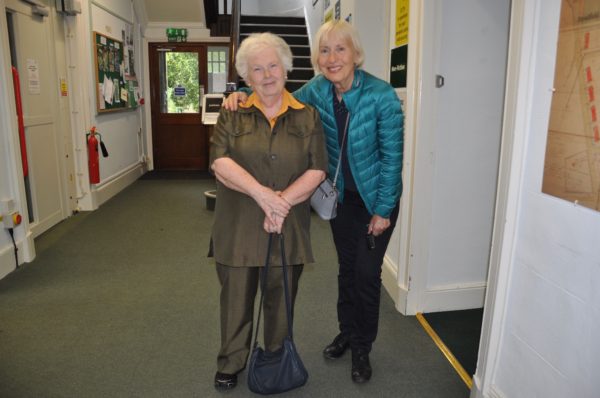 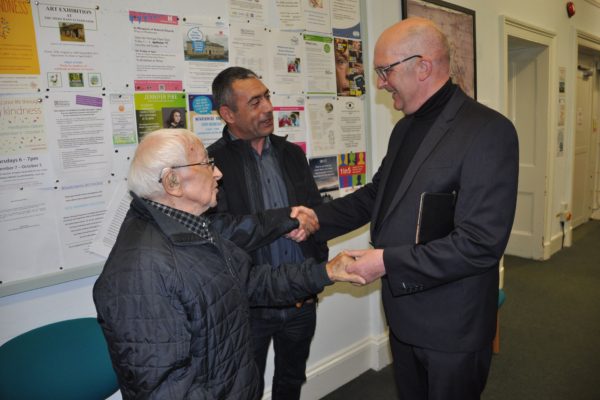 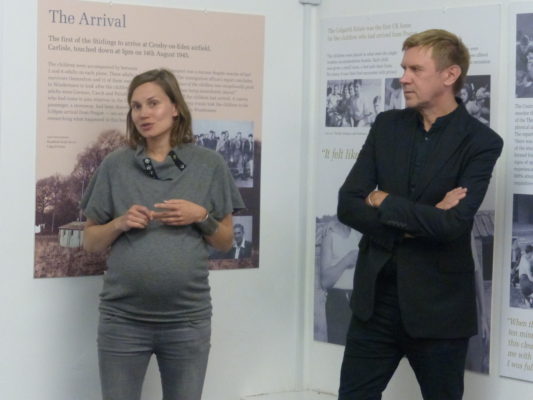 Kasia Redzisz was pleased to speak on behalf of the Tate Galleries, “since Miroslaw had been connected with them since the 90s and in 2009 he was invited to exhibit in the Tate Modern Turbine Hall.”  She thought that “what made his practice even more site specific to the Lake District Holocaust Project was the relationship between Windermere and Otwock, the town where Miroslaw was brought up and lives today.  After the war, many of the orphans from concentration camps around Poland stayed in Otwock.

The title of the installation ‘yromem’, which is ‘memory’ written backwards, is something that chimes with the memorial practice of the Lake District Holocaust Project.”  Kasia suggested that “memory should be working in both directions – we need to remember our history and heritage but have we really learnt our lessons?  The title subtly asks that question and it is for us to answer now.” 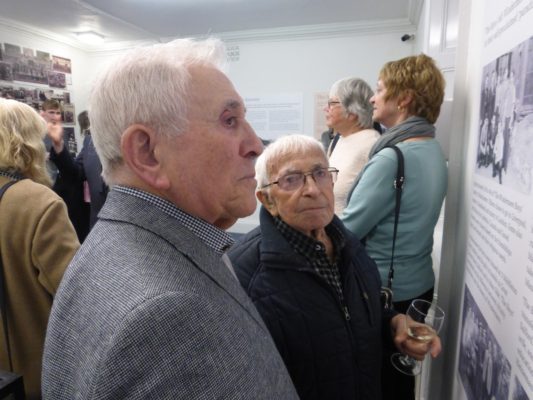 Ike Alterman, one of the Windermere children, and Sam Gontarz looking at photographs from 1945. 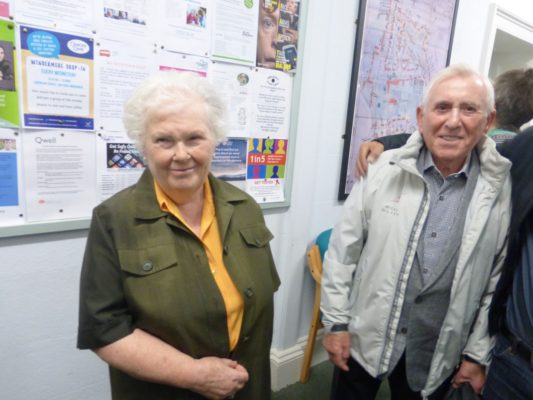 A CCTV camera beamed footage from the out of bounds basement of the library building onto a monitor placed, under Miroslaw Balka’s direction, in the window of the main gallery where the permanent exhibition ‘From Auschwitz to Ambleside’ is displayed.

Both the careful positioning of this monitor within the gallery and the film itself created a dialogue with the darkness of the haunting moving film ‘Nacht und Nebel’, a second film by Balka.  ‘Nacht-und-Nebel’ was a secret Nazi operation that started in 1941 where thousands of people ‘disappeared’. The film was shot during a foggy night in January 2014 in a forest near the artist’s studio in Poland. 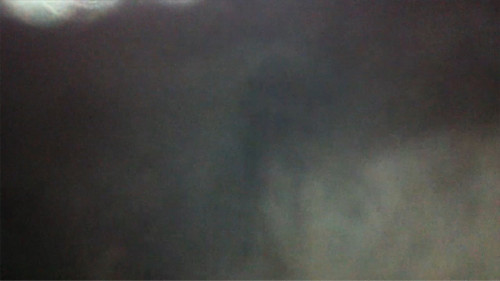 Subtle relationships were created between the darkness and the passage to the light, both figuratively and literally.

The basement carries with it the chill spectre of an unidentified presence and creates an immediate atmosphere between light and dark, hot and cold, preservation and decay, freedom and captivity. This basement is not accessible and yet we can see it through the lens of a camera. We look into a forbidden, unknown space. 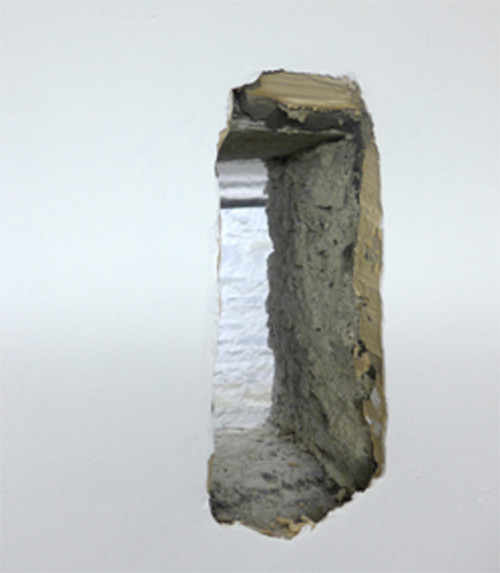 Basement image for CCTV camera,  ‘Towards the Light’. © Miroslaw Balka 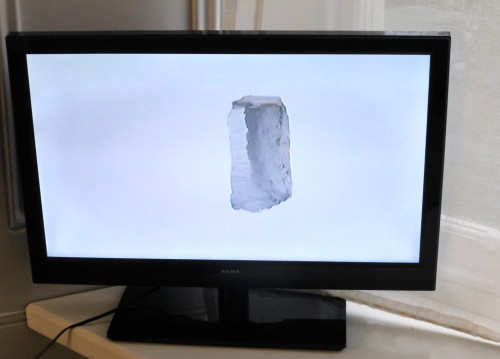 The symbolism of the basement film and DVD ‘Towards the Light’ is more complex than first appears and is infinitely more so when set against the film ‘Nacht und Nebel‘, which was exclusively on loan for display in late 2015.